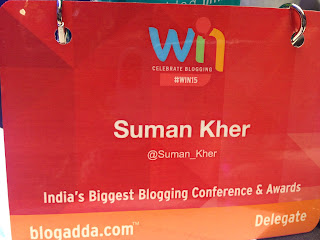 A day full of meeting people and having fun is great. It's even greater when it involves your passion - writing in this case. I blog for my passion for writing. And it is always a bonus to get to learn the ropes from stalwarts in the field. I registered well in advance for #WIN15 and was super excited about it. Though it was a little early and too long for a Sunday, I was there nice and early. I was greeted by smiling (and not sleepy) faces at the registration desk. I was also asked to give out a video byte about what I look forward to the most in the day. (Btw, I got to check if that went on air!). Once I was in, it was catching up with people I knew and the game of - doesn't that guy look like X on Twitter - began for me.

The event was in a huge hall and the stage was all set by the time we took our seats. The entry of the host of the day - Siddharth Kannan - on a cycle, greeting people on the way was an apt introduction to how much fun we were going to have with him. The event was divided into talks in the first half and workshops in the second. The day began with story telling with Lakshmi Pratury of INK talks who spoke about how to identify passionate story tellers.

Next up was a very interesting talk by Dhaka based blogger Rezwan who spoke about how blogging in evolving in his country. That was followed by Huffpost India editor, Sruthijith telling us about the best way to keep blogging and writing. The talk on travel blogging by Ajay Jain threw light on the lesser known aspects of travelling and blogging. It was pretty inspirational to know how traveling had really made him evolve as a person. This was followed by a chat session Anaggh Desai and Aditya Magal - the Gods of blogging. The morning sessions ended with talks on the business of blogging. Harini Calamur, Ashok Lalla and Prashanth Challapalli delivered insightful talks about how bloggers could monetize their blogs by writing for brands.

By the time we were out for lunch, these sumptuous designer cakes made by the talented chefs of JW Sahar greeted us in the lobby. Networking continued during lunch where we caught up with more people who had walked in late in the morning.


The workshops began post lunch. There were two workshops in each slot and hence you could choose just one. Since the first set of workshops were on food and travel blogging - both not my area of interest, I decided to wander around. I ended up in one of the other venues hosted by Blogadda where Pampers was launching a new diaper product. And guess who I found there....


It was awesome to see her and be a part of an event she was hosting. I have always found her fitness inspirational!

And then arrived the creative writing workshop with Natasha Badhwar that I was really waiting for. (The parallel workshop in this slot was on video blogging) It was the most unique workshop on writing that I have ever been a part of. Like her columns, Natasha's workshop had emotions involved and she brought a new aspects of what can make us better writers. Being ok with who we are and permitting ourselves to feel the way we are were fresh and unique perspectives I gained from her workshop.

The day was getting a bit long by now since we started at 8.30 in the morning. But the high tea was refreshing with yummy snacks to fill our bellies. The day was far from over and we had a whole lot of fun lined up! When we came back to the main hall of the conference, we had Suchitra Krishnamurthy of the Dole Dole and Kabhi Haan Kabhi Naa fame. This part of the evening began with Suchitra and Natasha (Badhwar) discussing the way blogging has changed since Suchitra used it in its earlier days. It was great to hear how she leveraged online power to promote her album during the 90s. And then came the grand Blog adda awards followed by the launch of the book Game of Blogs.

Phew! It was a long but fun day full of learning and meeting people. Looking forward to more such events in the future!

Self-Help books: How Much So They Help The Self?

I just finished reading The ONE Thing - a book that tells you how focussing on that one critical thing - on thing at a time - you can achie...